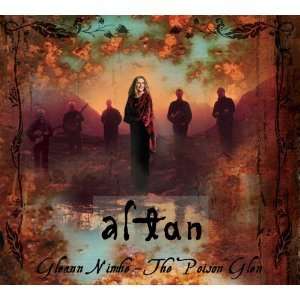 Irish traditional music group Altan will release their first studio album in six years, Gleann Nimhe, with Compass Records at the end of the month. The band has been together for 3O years, and this album is a return to the simpler sound of earlier recordings, after their work with the Concert Orchestra. Vocalist, fiddler and founding member Mairead Ni Mhaoinaigh says:

‘We went back to the roots of the six members of the band, with only Harry Bradley (flute) and Jim Higgins (percussion) as guests on this one. I also wanted to have the voice more to the fore in terms of the sound, less produced so that we could bring the music into the listener’s room a little more.’

Altan was formed in the 80s by Mairead Ni Mhaoinigh and husband, flute player Frankie Kennedy, who sadly passed away in 1994. Gleann Nimhe will be their thirteenth album.”Gleann Nimhe”, meaning the “Poisoned Glen”, is in Dunlewey, Co. Donegal.

The album is released on February 28th in the United States, March 9th in Ireland and March 12th in the UK. The group will tour the USA, France and Norway following the release.