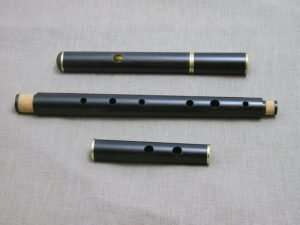 History of the Flute

The flute is an import in Irish traditional music, with quite a short history. It became popular in the 19th century, when classical flutes were first used to play Irish traditional music. Classical flutes in this period were wooden, with 6 fingerholes and several keys – it was only later that the Boehm design became popular. As with other instruments, the flute became much more widespread with the advent of mass production, which made it more readily available, and cheaper in price

In the 19th century, there were two main types of flutes; what we call today “German flutes”, and flutes by English makers. German flutes were generally anonymous mass-produced flutes of low to medium quality; while English flutes, by makers such as Boosey and Hawkes, or Rudall and Rose, were of excellent quality, had a large bore combined with larger finger holes, and a characteristic “big” and rich sound.
It is the English-model flute that was adapted by Irish traditional musicians, and many of these 19th century flutes are still played today, and models in good condition are particularly sought after.

Although antique flutes such as Rudalls or Boosey’s “Pratten” model are still excellent instruments, there are some disadvantages to playing them. Other than the obvious disadvantage of price and the difficulty in finding a them, it is also worth mentioning that many of these flutes may be higher in pitch than modern instruments – English “concert pitch” could be as high as A=455 in the 19th century (today, the standard is A=440) Instruments initially made for this pitch would have to be adapted to play in modern concert pitch, an adaptation that would have to be done by a maker.
Makers in the 20th century started making flutes, based initially on Rud all and Pratten models. Each maker adapted the model according to their own preferences, so that today, although we still speak of flutes being “Rudall” models, it is more accurate to speak of them being unique to a particular maker, and his adaptation or interpretation of the initial model.

Like the whistle, the keyless flute has six finger holes, and plays the scale of D. Producing a sound on the flute is not as simple as the whistle, however, as the embouchure requires a certain amount of work.

The flute is associated with several regions in Ireland: such as the Sligo, Roscommon and Leitrim area, or East Galway. There are several distinct styles of flute playing. The Sligo style is in general quite fast, flowing and ornamented. One great exponent of the Sligo style is Matt Molloy. The Leitrim style is highly rhythmic, less ornamented, and with much use of glottal stops and even tonguing, as in the music of John McKenna. The East Galway style is more relaxed in tempo, and also quite flowing, with many tunes in unusual keys – Paddy Carty, who played in this style, used a fully-keyed wooden flute.

Ornamentation on the flute

The flute makes use of fingered ornamentation such as cuts, rolls and crans. Depending on the player’s individual style, he may also use breathing effects such as glottal stops to a greater or lesser extent as an element of ornamentation.

2 thoughts on “The Irish Flute”